Pure Nacional, a variety of cacao, the plant used to make chocolate, that was once thought to be extinct, has been rediscovered in Peru. Pure Nacional, with its complex fruit and floral flavors, once dominated the fine chocolate market worldwide. In 1916, diseases struck the Pure Nacional population in Ecuador and within three years 95% of the trees were destroyed. The prized chocolate was thought to be lost, until now. The chocolate has been rediscovered growing in Peru. The United States Department of Agriculture (USDA), the world’s foremost genetics laboratory for the DNA testing of cacao, confirmed this discovery and after two years of hard work chocolate is being produced from these precious plants.

Late in 2007, Dan Pearson and Brian Horsley were sourcing fruit in Peru’s Marañón Canyon when they discovered cacao trees growing on small isolated farms in a remote horseshoe-shaped canyon surrounded by 6,000-feet canyon walls. The trees were growing football-shaped pods filled with a rare mix of 40% white beans and 60% purple beans in the same pods, or in some cases, the pods were completely filled with white beans. Familiar with only purple beans, they were curious about the rare white beans and sent leaf samples to the USDA for testing. “When they called with genetic test results and asked, ‘Are you sitting down?’ I knew we had found something special,” said Pearson.

Dr. Lyndel Meinhardt, Lead Researcher and Dr. Dapeng Zhang, Lead Geneticist from the USDA Sustainable Perennial Crops Laboratory in Beltsville, Maryland, analyzed the genetic structure of the beans and found that they were Pure Nacional plants native to Peru. “The international cacao database has 5,300 entries. None are Pure Nacional with white beans. Cacao pods with 40% and 100% white Pure Nacional beans are an unprecedented discovery,” said Meinhardt. They tested random leaf samples from various trees throughout the Marañón Canyon and confirmed that the Pure Nacional plants were growing throughout the valley. Dapeng said, “We are excited about this confirmation. It means that these cacao trees were indigenous to Peru. They are not exotic introductions from somewhere else.”

The high canyon walls in the Marañón Canyon created a unique microclimate for the trees. The trees thrive at some of the highest altitudes ever reported for cacao, between 3,500 and 4,100 feet. Horsley lives with the farmers and worked with them to turn the unique cacao into chocolate. The beans needed to be transported first by foot, then burro, then motorcycle and finally by all-terrain vehicle. Horsley said, “The small farmers and I had to learn quality practices together. White beans must be fermented and dried differently than purple beans, but it is unknowable in advance which is which,” said Horsley. After two years, several site visits by fermenting and drying specialists, independent laboratory testing and 81 fermenting and drying trials, they found the answers to processing the rare beans and founded Marañón Chocolate to offer their exclusive product to chefs and consumers.

Pearson traveled to Switzerland to have the beans made into one-of-a-kind chocolate by a renowned Swiss chocolate maker who found the white beans added a nutty flavor to the Nacional fruit and flora profile. The chocolate maker was recommended by Franz Ziegler of Ziegler Consulting and Paul Edward of Chef Rubber. Ziegler is an award-winning author and was named Pastry Chef of the Year in 2008 by the World Pastry Team Championship, where he has served as head judge since 2006. Ziegler and his colleague Paul Edward of Chef Rubber said, “In our combined 50 years of working with chocolate, we have never tasted flavors like this. We had to experience this ourselves, so we both traveled to Peru, met the farm families, saw the trees, the white beans, the genetics tests and then watched the next evolution in post-harvest processing that they developed. We saw the past and the future of chocolate.”

The team will assemble at The Institute of Culinary Education (ICE) in New York City on January 11, 2011 to announce the launch of the chocolate. ICE Chef Instructor Michelle Tampakis, a respected chocolate expert who was named one of Dessert Professional’s Top Ten Pastry Chefs for 2010, will be on hand with Ziegler, to guide a tasting of the unique flavor profile of this precious chocolate. Pearson, Meinhardt and Edward will present the story of the discovery of the chocolate in their own words and discuss the road to bringing this chocolate back from extinction. Pearson said, “The rediscovery of Pure Nacional and the first ever discovery of white beans in this pure thought-to-be-extinct variety opens peoples eyes. However, it is the remarkable delicate flavors, aromas and unique tastes that open the hearts of those who are passionate about chocolate.” 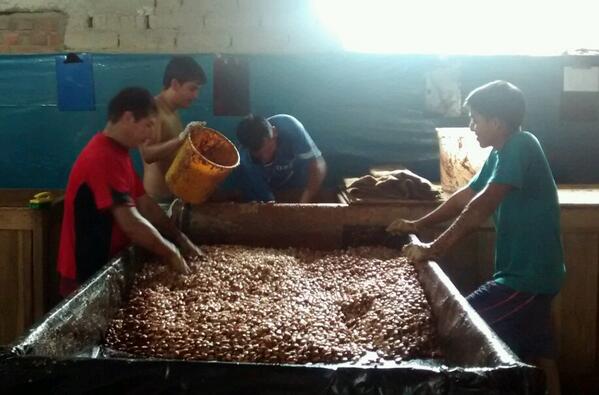 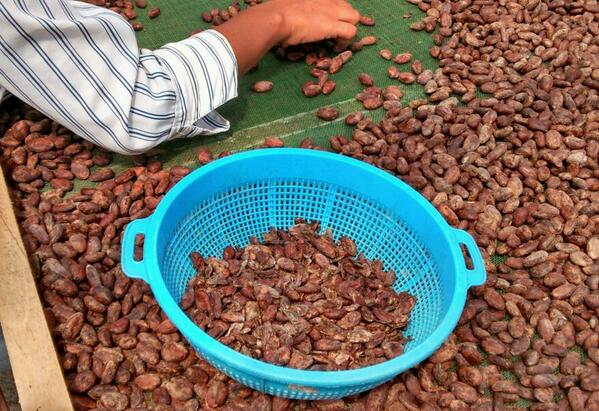 In Marañon Canyon with Igor Van Gerwen of House of Anvers

Pure Nacional beans ready for export in the Maranon Canyon

Rain and lots of mud in the Maranon Canyon

Strong rain in the Marañon Canyon

To Make Great Chocolate You Must Live With The Cacao Farmers